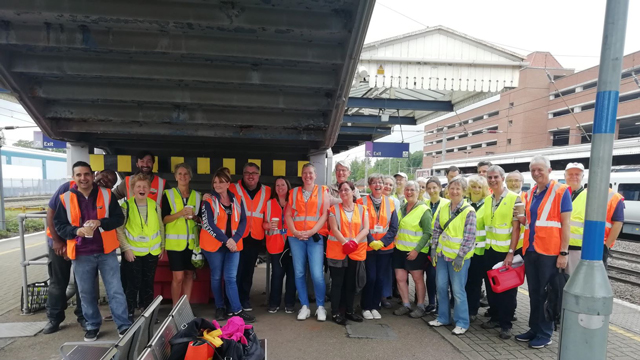 Welwyn Garden City group, All Aboarders joined forces with staff from GTR Great Northern and representatives of sponsors, donors and partners on Wednesday 31 July for a gardening event. The group planted up no less than six big planters, supplied by GTR. They now have twelve planters. Work continued refreshing the existing flower beds and troughs.

About 30 people attended, including guests who represented Rotary Club of Welwyn Garden City, Garden on a Roll, Welwyn Hatfield Borough Council, and private donors.  It was a productive morning with much gardening and painting activity, fuelled by refreshments provided by Marchio’s café on Platform 2. 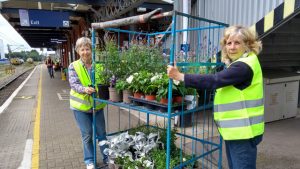 The group had a fantastic morning working on the station, building on what we have already done.  All Aboarders are grateful to GTR who organised the event and provided the six new flower troughs with compost and plants to go in them. The existing six troughs were donated by local organisations Smart10 and Digswell Community & Gardening Project. They were all very pleased with our efforts on the day and had fun into the bargain!  The station platforms are gradually being restored to their former glory.

A private donor said: “The station itself is really looking cared for, and as the work continues, it will be a special feature for the WGC Centenary. Keep up the good work, All Aboarders, it is a pleasure to see.”

WGC Station Manager, Will Buck was also enthusiastic: “It was fantastic to see GTR, All Aboarders and the community come together to install new planters and spruce up Welwyn Garden City Station. We at GTR are excited to continue to grow and nurture the relationship between ourselves and the community.”

RT @RailDeliveryGrp: Today, we welcome the opening of Worcestershire Parkway, the county’s first new railway station in over 100 years 🎉 I…