A seasonal visitor for Glossop Station 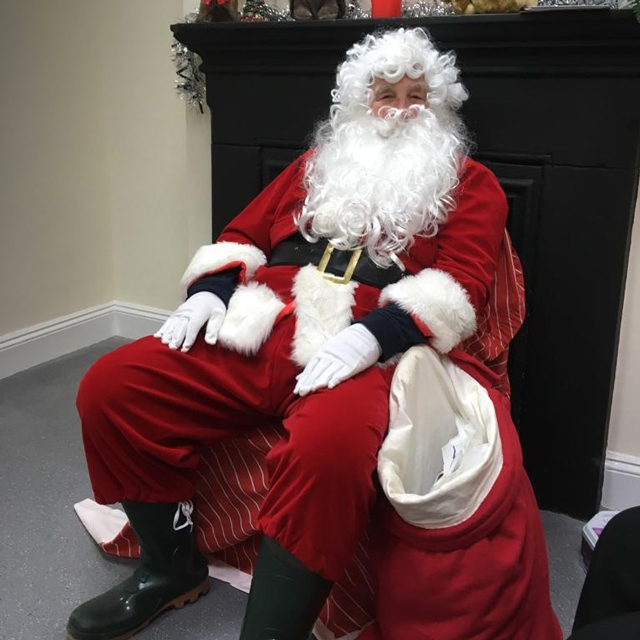 Father Christmas paid his annual visit to a seasonally decorated Glossop station on Saturday 7 December, where he met  over 70 children with their families in the station’s newly renovated waiting room. Every child was greeted personally by Santa and given a small free gift.

Elsewhere on the station, feet were tapping to the live music provided by the folk group Spindrift. Children were also busy at a nearby  stall making decorations for the Christmas tree. One young man made a special decoration for a train driver with his thanks to them. This was proudly presented to the Northern driver who placed it carefully inside his cab.

Catching the eye of children and passengers as they moved around the station was a seasonal model interactive railway layout provided by Glossop Model Railway Society.

This year’s guests from Northern included Pam Williams, Local Area Manager and Raj Chandarana, Business Stakeholder Manager for Northern. After switching on the Christmas tree lights Raj made a short speech thanking the Friends of Glossop Station (FOGS), and staff for making the station a welcoming one. Then an unexpected surprise for Neil Williams of FOGS. Becky Styles Community and Sustainability Manager for Northern stepped forward in front of the crowd to present Neil with a large wrapped gift. This turned out to be a roller destination blind from a local 323 train showing of course Glossop!

Becky explained that this was being given in recognition of FOGS and Neil’s efforts over three years to persuade Northern to retain the popular Class 323 trains. In the summer Arriva announced a deal to retain its 323s and complement them with sister units from West Midland Trains. The first two to be refurbished in Northern livery are now out and about. In fact Northern had kindly rostered one on the line that day. The destination blinds have been replaced by digital versions in the refurbished trains hence the gift from Gemini, Porterbrook and Northern to Neil. He was delighted with the gift and the card that suggested he choose a different destination every day!

FOGS would like to thank all the people who helped make their Christmas event a success and their guests from Northern for joining in the fun.

RT @watfordgap: What a great way to make good use of an unsightly bit of platform digging. Paint a tree on it! This and much more can be fo…