Following on from the successful hub and platform developments at Maryport Station, a group aptly named The Maryporters have taken on the adoption of this local station. Working in partnership with Community Rail Cumbria and Northern, the station entrance has been transformed with a vast range of flowers and herbs to showcase the influence Romans had in Britain. In addition to this Cumbria Youth Alliance have also been busy filling planters to brighten up the station platform. 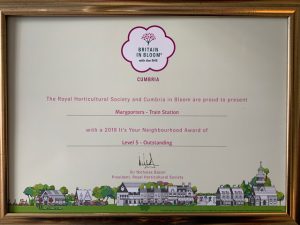 The judges from Cumbria in Bloom visited the station at the start of July and were overwhelmed by the developments and partnership working being shown at Maryport station, particularly highlighting their pleasure at seeing young people involved in community projects.

We are delighted to announce that following the hard work and effort shown in such a short space of time, The Royal Horticultural Society and Cumbria in Bloom have awarded The Maryporter’s/Train Station with a 2019 It’s Your Neighbourhood Award Level 5 – Outstanding.

RT @RailDeliveryGrp: Today, we welcome the opening of Worcestershire Parkway, the county’s first new railway station in over 100 years 🎉 I…