Mytholmroyd Station Partnership’s Sue Mitchell brings us up to date with all the latest happenings from the West Yorkshire station.

The newly restored shell of the Mytholmroyd Station Building, phase one completed a month ago, is creating a lot of interest amongst residents and businesses alike, including members of the press, local library, café owners, and community groups.

We refer any enquiries on to Northern. We await the development of the rehabilitation of this fine example of Victorian railway architecture for the social use of the Community.

Another busy month has started for the members of the Station Partnership; the summer flowers have been planted in the pouring, windy weather, swiftly followed by a visit by Network Rail management team of Janet and Tim who were looking at the various requests of the Partnership for use of some assets of Network Rail.

It proved to be a productive and pleasant hour; mostly very positive (except no, Geoff cannot expect a footbridge, nor water fountains on the platforms!)

A grey and drizzly day welcomed our visitors to Mytholmroyd’s fourth annual ‘Fanfare for Local Business’ and the ‘unveiling’ ceremony starring Scout Road Academy’s youngsters who had visited Royd Ices established here in Mytholmroyd (1889). A workshop session orchestrated by Annie Lawson and her handmaidens Brenda Jane and Sue followed.

The artwork is now unveiled and ready for all to admire; it certainly is a very classy advert for local ice -cream!

Surprise, the sun broke out just as the guests led by the Mayor of Hebden Royd Town Council, Cllr Dr Carol Stow, met the children from Scout Road Academy. What a bonus for everyone – our charismatic Mayor, the colourful posters, chattering guests and the children together in the bright and warm sunshine!

All in all it was a fun and excellent day for our visitors from the stations of Bentham, Accrington, Brighouse, Huddersfield, and Hebden Bridge, together with our members. It was a grand day! 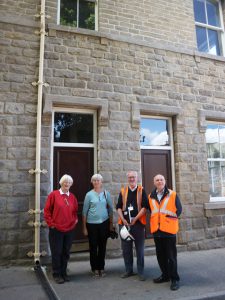 We had been informed that the ‘former station building’ in Mytholmroyd was being considered for a Railway Heritage Award as an on-going restoration of the building. There were two visits, one on the 19 June, followed by a Friday visit on the 21 June 2019.

Geoff and I were caught up in the Friday visit as organisation of a ‘comfort arrangement’ was needed; we happened to be around to greet Marion Armstrong, Railway Heritage Award Assessor on her arrival.

It was obvious Marion was already enthusiastic, pleased with the installation of the iron downpipes and roof work completed as Tony Doherty Heritage Surveyor for Capita  and  Danny Leigh, Network Rail (Retained) Estates Surveyor arrived.

Following  H&S introduction, Tony suggested a walk around different aspects of the village to show how the view of the building has enhanced the whole village; but not before Marion had asked who had prepared the paperwork as she stated she had never received such a complete, professional and interesting nomination form. Tony was able to say it was him! What a start to this assessment – we were all delighted.

As non-heritage people, Geoff and I felt privileged to be included in the tour. I understood (nearly) the benefit of lime pointing; it is the constituents of the mixture (two different types of sand mixed with coal grit) that allows any rainwater that seeps into the stone to evaporate naturally through the pointing. (Modern pointing is waterproof, this leads to damp problems).

We learned that seven sash window frames were originals, restored on the 1st floor; these provided a template for the remaining sash windows and were constructed by a local firm.

Tony of Capita praised the local firms who worked alongside the railway professionals – Cragg Builders who worked so hard at constructing fireplaces and cleaning the graffiti by hand from the first floor in particular..

And there were so many more interesting details to do with railway heritage that we heard from these enthusiastic and delighted experts.

And even better, for us, Tony has promised to come, in his own time, to show us, and our guests round the building followed by an informal lecture.

What a perfect ending to a fascinating day.

Happy #BurnsNight! To celebrate we're showcasing a selection of scenic Scottish railway routes over on our Scenic R… https://t.co/9tWlqRrg38

community_rail
Have you signed up to our eNewsletter yet? Get ins

Thank you for joining us on our special #BurnsNigh

As we approach the last stop on our special #Burns

Onwards with our #BurnsNight online tour as we tak