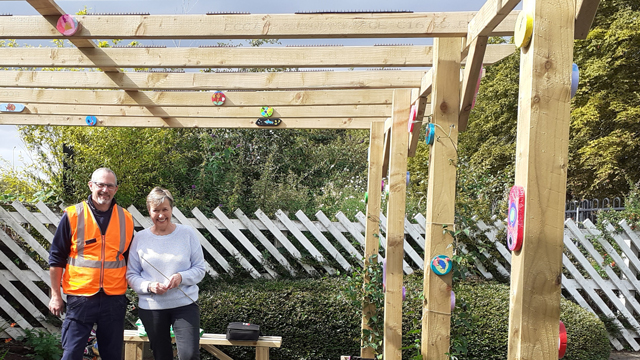 A lack of shelter for passengers waiting for taxis and buses has inspired a passionate group of volunteers to build an environmentally friendly pergola with seating at Uttoxeter Railway Station. The wooden structure has been planted with climbing plants to create cover and fragrance and to provide habitats for insects and birds.  The project was led by volunteer Mick Eyre, environment maintenance manager for Stoke-on-Trent City Council for 31 years until 2007, when he won a Gold Medal and Best in Show for his Clarice Cliff floral bedding scheme at the RHS show at Tatton Park.

The pergola is decorated with imaginative paintings of minibeasts created by pupils from St Mary’s First CE (A) School.  They worked with artist, Tracy McGuiness-Kelly, on the project funded by the North Staffordshire Community Rail Partnership.

Councillor McGarry said “The station is a very important gateway to the town and we are grateful to the Uttoxeter Station Adopters for their hard work in keeping it colourful, clean and welcoming.”

Before joining Stoke-on-Trent City Council, Mick Eyre was a civil engineer who learnt many of his skills from his master builder grandfather, enabling him later to build his own extension and summer house. He is a passionate gardener, inspired by his father who tended over 100 varieties of roses in the family garden.  Mick opened his own Uttoxeter garden this summer and raised £405 for St Lawrence’s Church in Bramshall.

Mick said “It has been a real pleasure to work with the other volunteers and with EMR staff on this project.  The pergola will look lovely when the plants have grown up and covered it, providing cover for passengers when they’re waiting for taxis and buses.  I’ve enjoyed using my skills to complete this much needed shelter for the station.”

Mick joined the Uttoxeter Station Adopters in 2008.  This is a dedicated and hard working group of station adopters who meet regularly to plant, weed and water the station flower baskets and beds and pick up litter.

Find out more about the station adoption programme and to get involved with adopting a station along the North Staffordshire route (Derby to Crewe).

RT @TVCRP: Would any #northeast #Cumbria #Northumberland journalists like a #PressBriefing on this fab #stayoffthetrack #competition #journ…