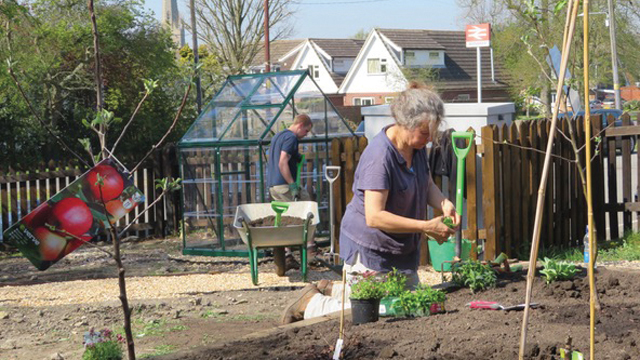 The Poacher Line Community Rail Partnership had identified a neglected piece of land, including an old station building, next to Bottesford Station that they felt had the potential to be transformed for community use and become a friendly garden.

The line officer held forums and attended parish council meetings to ascertain what local residents might like to see the land used for, and a community garden open to all was the desired option, an idea that had been discussed in the village for some years.

After seeing the success of projects with other community rail partnerships, as well as acknowledging a gap in their own gardening knowledge, the Poacher Line successfully engaged The Bee Friendly Trust as its main partner on the project. A plan was subsequently drawn up to clear the land and create a garden, wildlife haven, and educational space.

The transformation of the site was split into three phases; community research, permissions, planning and funding; clearing the site to create the garden; and finally redeveloping the building. Costings were made and £32,000 worth of funding was acquired. The Vale of Belvoir Lions group also donated a completely recycled plastic bench, and in-kind support in terms of volunteer time and water access came from East Midlands Trains, Network Rail and station neighbours. 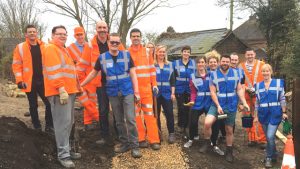 Project planning was done in stages, with consultations held locally alongside communications via social media. The local primary school and Beaver group designed different aspects of the garden, with eco-friendly options, such as water butts, used wherever possible. After the land was cleared by a contractor, seven community clear-up days were held over a six-month period, attended by more than 90 volunteers. The garden was then developed with the building of raised beds and paths, a rockery, a greenhouse, a pond and a composter, coupled with the planting of wildflowers and fruit trees.

Using their initial funding award, the partnership cleared debris from the building, before having it painted, re-roofed and re-pointed. Further work to reinstate electricity and water supplies to the building is planned, with the aim of providing station adopters and users of the garden access to an education and storage space.

The grand opening of the new site officially took place in June with Her Grace, the Duchess of Rutland, cutting the ribbon in front of all those who had volunteered their time and worked so hard over the previous 18 months.

As a result of the project, the partnership now has four station adopters at Bottesford who are working together to form a ‘Friends Of’ group. One of the adopters works at the local secondary school, and has started a gardening club based at the station with eight students. The local Beaver group has also visited the site to install four miniature bug hotels.

The partnership launched a competition to pick the name of the garden, with the top five entries put to a public social media vote. The winner was chosen as ‘Bottesford Friendly Garden‘, or ‘ The BFG’ for short.

Once the building is fully restored, the education space will be fitted out with boards containing wildlife facts and the story behind the garden’s creation. The partnership also has plans to team up with ‘The Friendly Bench’ – a community project in Bottesford that tackles loneliness and social isolation – to develop some joint initiatives.

A Poacher Line spokesman said: “The station is now unrecognisable compared to 18 months ago. It is looking fantastic, is home to many varieties of wildlife, and is a place for the community to enjoy.”