With more than 850,000 people in Britain living with dementia, including tens of thousands near the Bentham Line, the Leeds-Morecambe Community Rail Partnership felt it was the right time to focus on this group to help them continue enjoying travelling and sharing experiences with others. The bold concept was to create Britain’s first-ever dementia-friendly railway route on the Bentham Line.

To raise awareness of dementia among rail industry stakeholders and partner groups, the partnership devised a pair of one-hour training sessions, one similar to a typical dementia friends session, and the other based on a series of videos within transport settings. 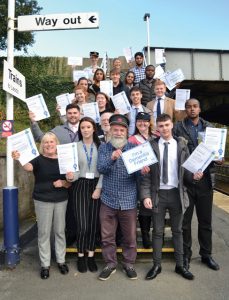 The partnership carried out audits of the line’s stations looking for ways of making them dementia friendly, such as simplifying options for displaying information, buying tickets, and finding the right platform and train. A detailed report was presented to Northern and Network Rail as they prepared plans for a major refurbishment of Keighley Station, and station adopters at Bentham introduced simplified timetable posters which were well-received by all passengers.

To complement train journeys along the line, four dementia-friendly walks have been created at Morecambe, Bentham, Bowland and Saltaire to help recall memories of the seaside, countryside and industrial heritage.

Impressed by the positive feedback from the awareness sessions, Northern produced a video for their staff about how people living with dementia can be supported on the railway, and a film about the dementia-friendly walks. A Northern Class 150 train was named ‘The Bentham Line – A Dementia Friendly Railway’ at Leeds Station, and now acts as a roving ambassador for the project across the local rail network.

The partnership now organise visits for dementia groups and have welcomed more than 120 people on trips to Morecambe Bay and to the Forest of Bowland. Leaders say it has been “amazing” to see the renewed confidence, enjoyment and memories experienced by those involved, including one group who had not left their care home in Keighley for five years.

The partnership has assisted in the founding of Dementia Friendly Bentham and provided vital support for similar groups in Morecambe, Lancaster, Skipton, Keighley, Shipley and Leeds. They have also received enquiries from a host of train operating companies – including Grand Central, CrossCountry, TransPennine Express, ScotRail and Arriva Trains Wales – and other community rail partnerships interested in replicating the project in their own areas.