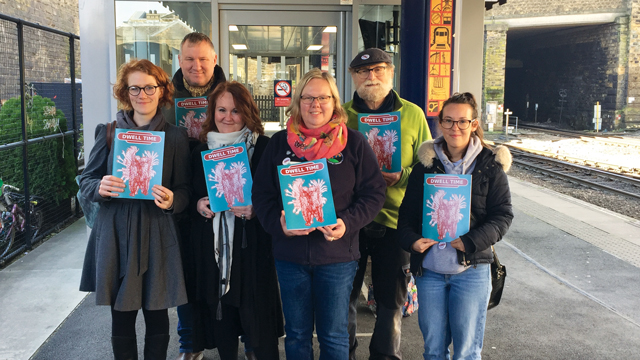 Dwell Time was developed as an arts project to raise awareness of mental wellbeing and to provide a platform for people experiencing mental health issues to share their stories through art and writing. It subsequently developed into both a free publication distributed on the railway network and an online blog, allowing its content to be seen by as wide an audience as possible.

The project is curated by artists and writers who have ongoing mental health problems themselves, and is developed in conjunction with the Penistone Line Partnership. The initiative borrows its title from railway terminology, with dwell time meaning: “The time a train spends at a scheduled stop without moving. Typically, this time is spent boarding or alighting passengers, but it may also be spent waiting for traffic ahead to clear, or idling time in order to get back on schedule.” Those involved saw this as a suitable metaphor for the time each contributor, participant and reader takes to reflect on their own and others’ mental wellbeing.

Organisers held an open call for contributions towards the project, with each one published on the blog and shared via social media. In October 2018, the Dwell Time curators led some workshops with Creative Recovery Barnsley, in which they created cut up poetry with recycled materials (old magazines, train timetables, etc). To coincide with National Poetry Day, the poems were read out as public performances on Penistone Line trains.

As word about the project spread within the local art community, the team were asked to present at an arts and mental health event in Leeds run by Curatorspace, where they welcomed any interested artists to collaborate on their launch programme. The open call for contributions closed at the end of 2018 and the Dwell Time team selected, curated and designed their first print issue, a 56-page publication featuring 80 contributions. A thousand copies were produced, and the inaugural issue was launched with a series of events along the Penistone Line in March 2019 to coincide with Penistone Art Week.

The Dwell Time publication has been distributed at further launch events, via railway and arts networks, from the Platform 2 waiting room at Huddersfield Railway Station, and at several wellbeing events that the team has attended to promote the project. The feedback from contributing artists, partners, rail networks, the arts community and the general public has been described as “overwhelmingly positive.”

A Dwell Time spokesman said: “The positivity and encouragement to extend the project further has led Dwell Time to develop a second programme of workshops and community interviews for 2019, plus another open call to culminate in a second issue of the publication. We have also been awarded a microgrant by the Yorkshire Visual Arts Network to produce an exhibition for Huddersfield Railway Station of the work we have produced, which is a testament to not only the community support for the project, but the arts networks recognition of this as a valuable project.”