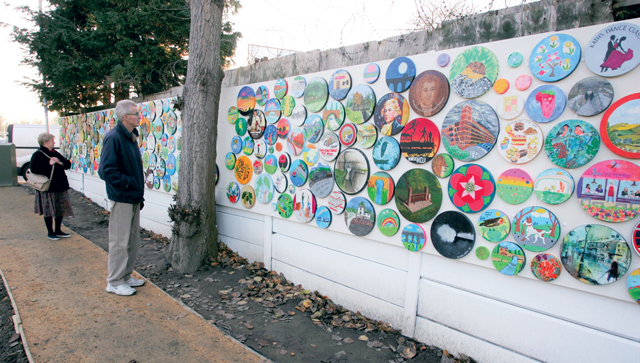 The Friends of Rose Hill Station, in Marple, recognised that their area had an ageing population, with younger generations consisting mainly of families who had moved into the town. There was perceived to be a lack of inter-generational engagement and active participation in local life, resulting in a gap in the transfer of local knowledge. In addition, there was also no platform through which the different generations could connect.

The Friends group identified an art project as a way of both increasing community cohesion and improving the station environment. They felt that using Rose Hill Station as a base could result in the community coming together, encourage greater use of the station, highlight rail safety, promote sustainable leisure activities such as walking and cycling, and improve the appearance of a bare concrete station wall.

After creating and submitting a successful bid for a £10,000 Awards for All grant, a working group was formed consisting of friends group members and local artists. Artist Tracy McGuinness-Kelly of local arts group Art Stop, used her contacts with local schools to inspire children to get involved and create part of the artwork, which was designed to portray life in Marple, past and present. More than 300 people painted circular discs to form a huge mural, with the community involved in the design, development and delivery of all activities.

The project involved people of all ages and abilities, with the youngest artist aged under five, and the oldest aged 100! Many contributors also took part in three workshops developing themes around ‘You, Marple Life and Trains’, ‘Marple People – Then and Now’ and ‘The Story Behind my Artwork’.

The Friends group volunteered their time to help create the mural, and provided project management and engineering expertise in relation to developing its backing board hanger system. The group was also instrumental in achieving approximately £5,000 in additional funding to develop the site. Members also used Twitter, Facebook and local media to raise awareness of the project, publicising the workshops, an open day, and the launch of the mural. 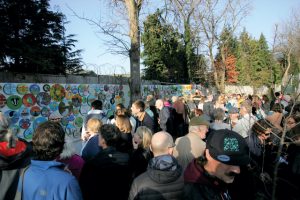 The mural was officially unveiled at the station in November 2018 in front of more than 200 guests. All of the artwork on display had a specific connection to the local area, with references to its natural and industrial landscape, its canals and railways, and its history and modern-day interests. Paintings included images of Marple’s local cake shop, a shoemaker, Market Street, the Cotton Mill, Middlewood Way, Rose Hill Station, train tickets, rail safety messages, vegetation, wildlife and significant buildings and locations, all generated in either school sessions, community group meetings or in people’s own homes. A resource booklet is to be produced as a lasting record of the inspirations behind the project, intended to help continue to promote and strengthen inter-generational relationships, and to further the understanding and appreciation of Marple as a place.

Commenting on the success of the project, a Friends group spokesman said: “We are proud to have been part of the Inter-generational Community Art Project, which has furthered our aims of enhancing the station as a community resource and establishing a permanent legacy. The involvement of local schools and many community groups of differing artistic skills gave life to communicating the stories of Marple. People of all ages who would not normally meet came together to work, eat, chat and laugh together. Feedback has been very positive, including appreciation of the workshops, the importance of bringing people together, and benefits to mental health and wellbeing.”