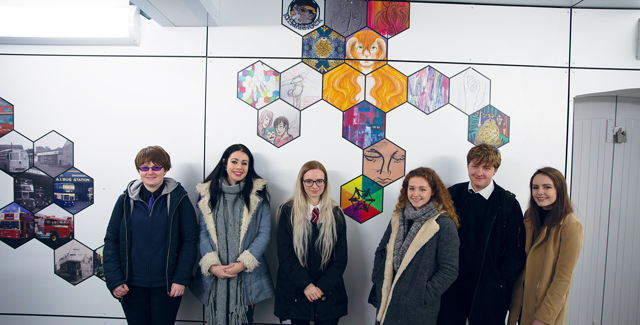 Kilmarnock Connections is a permanent public artwork that aimed to revitalise Kilmarnock Station Underpass, officially opened on 7 December 2016. The project was initiated by a partnership led by ScotRail, as an integral feature of a £300,000 project to upgrade the underpass.

Kilmarnock is a town in East Ayrshire, 18 miles west of Glasgow. With a population of 46,000, the town has suffered economic decline. The railway station lies at the heart of the town with direct connections to Glasgow and Ayr. The station’s buildings have been the subject of community rail led investment that has seen various new community uses. However, the underpass, which provides access to the station and acts as a public thoroughfare connecting the town to residential areas and a college, was in a poor condition. It therefore acted as a blight on the station and provided little by way of a welcome to the town.

Recognising the need to support regeneration of the town centre and new college, ScotRail developed a package of funding to redevelop the underpass. The ambition was to not only upgrade the area but introduce a public art and community development element to the project to enhance its future sustainability.

ScotRail commissioned award-winning community art organisation WAVEparticle to lead the project. The brief provided sought to ensure that local knowledge and participation was at the heart of the process. WAVEparticle hosted a series of community workshops and meetings, including at the Killie Browser bookshop in the station, Dean Castle, local schools and the new Kilmarnock Campus of Ayrshire College. They encouraged people to bring a drawing, story or anecdote that connects to or says something about Kilmarnock or the station. The response was overwhelmingly positive, with many people keen to be involved. People got in touch with wonderful stories and images that celebrate the town, including a story about the railway station porter who discovered a dog in a goods wagon and chased it down platform shouting, “Stop that dog!” These stories and images provided the inspiration for the artwork that was installed.

The team also presented at the Ayrshire Artist Network event at Dean Castle, where they met cycling legend Graeme Obree, who lives in Kilmarnock. Graeme generously donated items for a permanent display box.

The final artwork is a series of wall mounted features designed to allow content to be added on an ongoing basis, as a ‘living museum’. There is a series of 10 bespoke hexagonal display boxes, permanently installed in the underpass, where individuals and organisations have been invited to exhibit objects and artefacts. For example, The Dick Institute, the Railway Heritage Trust, Creative Spaces, the Artist Network and local artist Justin Wilson are all curating boxes. The hexagonal cluster design emerged as an appropriate choice as it reflects the connectivity of the town. In the past the town was connected through a hive of industry, now it is winning awards for the strength of its community.

Aside from a wonderful new piece of artwork welcoming visitors to Kilmarnock and giving local people a sense of pride, the level of community engagement was an important outcome. A series of workshops and meetings with schools, colleges, businesses, organisations and individuals took place, to generate content for artwork. Over 250 people were involved and many continue to support the project, through regular updates of the displays.