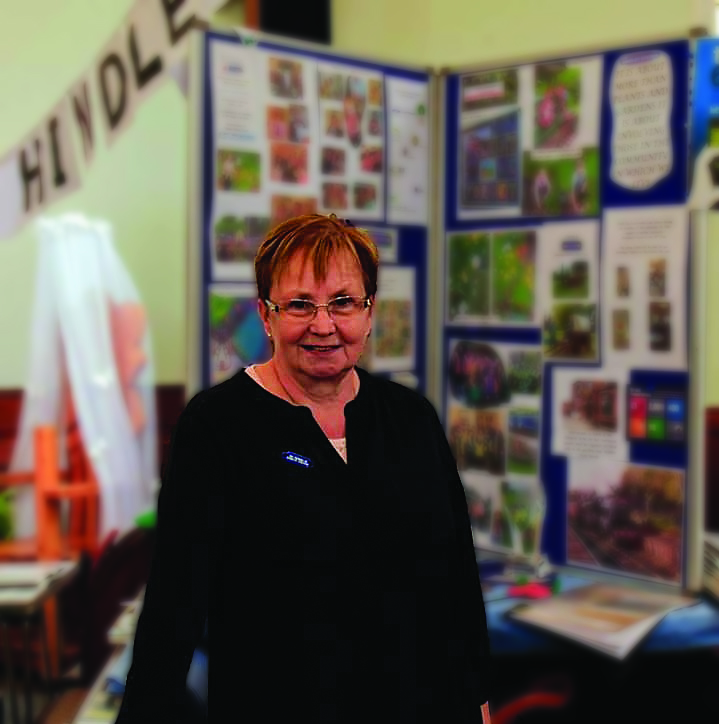 Sheila Davidson has been involved with the Friends of Hindley Station from the beginning and has worked tirelessly over that time. A born organiser, Sheila is a true ambassador for the group, representing them in the community and beyond. She is Secretary of Friends of Hindley Station, a member of Women in Community Rail and represents Hindley at Community Rail Network seminars, Northern meetings and events. Sheila also liaises with Transport for Greater Manchester, Northern, Network Rail and Carillion. In March this year Sheila was presented with a Heart of the Community Award from Hindley councillors, endorsed by the local MP, to celebrate her work. Sheila is the first to acknowledge that none of the things she has done over the years would have been possible without the support of her husband Sandy, who is also her chauffeur and gofer.

Examples of her work

Supporting vulnerable families: Greater Manchester Police were launching a pilot scheme in 2015 for children in vulnerable families. Sheila was approached to help them with Hindley Young Police Cadets. She sourced funding for their uniforms and along with Sandy assisted initially for the six weeks of the summer holiday that year and has continued to do so every half term since then.

WWI 100th anniversary: Last year Sheila involved the whole community in a Tribute to the 100th Anniversary of the Battle of the Somme. She approached the local high school about creating a piece of artwork using crocheted or knitted poppies to be placed in the gardens. She had hoped for 100 but received many more, and a friend from another group supplied silk poppies, which she used to decorate the centrepiece. In November, representing the station, Sheila placed a poppy wreath supplied by Northern on the local war memorial, having walked with Hindley Young Police Cadets.

Mining heritage: To acknowledge local mining heritage Sheila researched and sourced photographs with the help of a local expert on the former pits in the area.  One of the Friends, Eric, was enlisted to build a replica pit head and cottages that had stood in the yard of Ladies Lane No. 4 Pit, which was located across from the station.

Fundraising: With the assistance of Friends and those in the community the Queen’s Birthday Celebrations in 2016 raised £205 for Wigan and Leigh Hospice. The residents of Kildare Grange Sheltered Accommodation are supported in organising a Strawberry Fayre each June which involves them and enables them to support the work at the station – last June they raised £406.70. In return each December the Station Friends hold a Christmas Do, complete with meal, gifts and entertainment for the residents.

Displays: Sheila creates poster case displays in and around the station, as well as to take out into the community. In the past year these have included: Celebrating Hindley Weekend, Heritage Weekend – St. John’s Methodist Church, Hindley History Society, Residents – Acorns Care Home: as part of the Dementia Friendly Community, St. David’s Haigh, Mothers Union.

Partnerships: Sheila has no problem contacting someone who can assist in whatever the Friends are doing. It was through such a contact that the group got the support of Bickershaw Hall, a family-run nursery that now sponsors or discounts the plants the group uses. The work Sheila continues to do with young people as a governor, through Guiding, and more recently with Hindley Young Police Cadets, brings further contacts.

Passenger queries: Ever present on the station (sometimes asked if she ever goes home), Sheila assists passengers with any queries they have and promotes the Friends at every opportunity. In this way, the group has received support, such as with plants and donations, from the wider community and beyond.

Sheila and Sandy visited Orrell Station and a friends group has now been formed, which they continue to support. Over the years, Holmes Chapel and Westhoughton and other groups have been supported as they set off on their journey. Sheila and the Friends have also supplied time, tools and plants to support the work at Wigan Wallgate. And at Manchester Victoria, station manager Andrew asked Sheila and Sandy for their support; they cleared four planters, sourced plants, and delivered and planted them on the concourse.

"The Games haven't just been about sport - they've been about culture, creativity, community & the coming together… https://t.co/g6gQSBUqLL

community_rail
Britain has some amazing scenic routes. From majes

Taking the train is not just about going from a to

#ExploreTheGreatOutdoors and discover the #Cambrid

The recent hot weather and record temperatures are