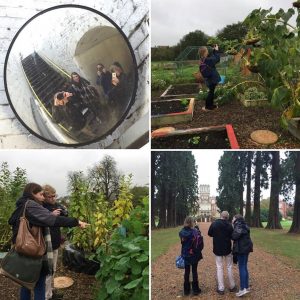 A group from the East Surrey YMCA took part in a photography project, taking beautiful, professional quality photographs of local flora and other objects of interest around the station and in the local area. These have been enlarged, printed onto permanent material and have been given pride of place decorating the station and its underpass.  Sussex CRP would particularly like to thank Ella Sowton, the group leader for managing this project.

The East Surrey YMCA are extremely active partners in and around the Redhill (East Surrey) area and have been involved in several projects at various stations.  Sussex CRP are looking forward to something new and exciting that is being planned for Redhill station.

The County Care Group, that are active station partners at three of Sussex CRP’s stations, have been advising Southern’s accessibility manager on certain projects and have generally proved to be very active in the spirit of community Rail.

As a little thank you for their hard work, Sussex CRP arranged for them to be given a guided tour with special access to Gatwick Airport. Kevin Weymes, the surface access strategy manager arranged a fabulous day out for the group. They were shown around the airport both inside and out, driven out to see the planes taking off, met various members of staff who explained what their role is at the airport, and travelled on the monorail. In addition, the airport police paid a visit, allowing the group to sit in the cab and turn on the blues and twos. Sniffer dogs were brought along to say hello (much excitement from both humans and dogs), the dogs role was explained, and everyone got to stroke and pet the dogs.  Last but by no mean least, the airport’s fleet of Tesla cars arrived for the group to see. These electric vehicles put on a ‘musical dancing display’, much to the amazement of the crowds of people waiting at the bus stops who whipped out their phones to film what was happening.

It was a fabulous day out, so many people made an effort to welcome the group.

Gatwick Station recently approached asked Sussex CRP for help brightening an area at its station. They accepted the challenge and had images that have been used previously for display at events, enlarged to giant proportions. The images have been installed at the top of the escalator from platform 7.

RT @RailDeliveryGrp: We wish Newcourt station a happy 5th birthday today! 🎉 On the Avocet Line, it has been serving East Devon since 2015…

RT @networkrail: ❌🚶‍♂️🚶‍♀️ We’ve launched our new trespass campaign reminding everyone you're on dangerous ground trespassing on the railwa…