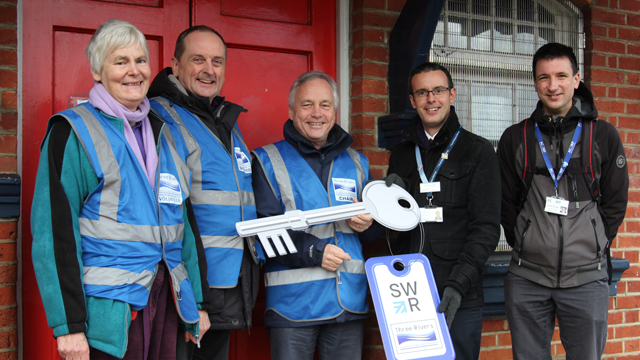 South Western Railway is delighted to announce it’s leasing a redundant space for a local community group, in a franchise first.

Swaythling Station building is the first property within the franchise’s portfolio of redundant spaces to be leased on a peppercorn rent basis and made available for community use. The agreement has been made with Three Rivers Community Rail Partnership (CRP), a not-for-profit group which receives funding from the train operator, and other partners, to help involve locals with the railway in places such as Southampton, Winchester and Salisbury.

The space, which includes two rooms, will now be refreshed by the CRP, including adding heating and power sockets, before it is offered out to community groups in the area. Opportunities will be explored alongside this, including strengthening links with local schools and exploring the possibility of setting up of a ‘Free Shop Friday’ programme, as undertaken by East Hants CRP at Petersfield station. The CRP is also signing leases for the old toilets at Netley, as well as agreeing terms on taking over the building at Shawford.

As part of this unique building project, SWR has provided funds to the Association of Community Rail Partnerships (ACoRP), the national body for CRPs, to employ a part-time officer to support the work. The officer is in the process of viewing all the properties that SWR has made available. A list of all locations can be found here.

Dan Wright, Community Rail Support Officer for ACoRP, said: “Community Rail is all about connecting communities with their railway, as Three Rivers CRP is doing here, and we are excited to be working with SWR to find community uses for their redundant spaces at stations. By opening up these spaces and making them available on leases community groups can afford, SWR is showing the way. We look forward to other leases being signed with community groups as this work progresses.”

Andy Harrowell, SWR’s Community Rail Manager, said “We are delighted to agree the lease on the first of the buildings this franchise has offered up for community use, and thank everyone involved in the CRP for the work they have undertaken to get this organised with us. I think the space will provide a wonderful new facilities for the community and look forward to seeing the rejuvenation of the rooms.”

RT @watfordgap: What a great way to make good use of an unsightly bit of platform digging. Paint a tree on it! This and much more can be fo…