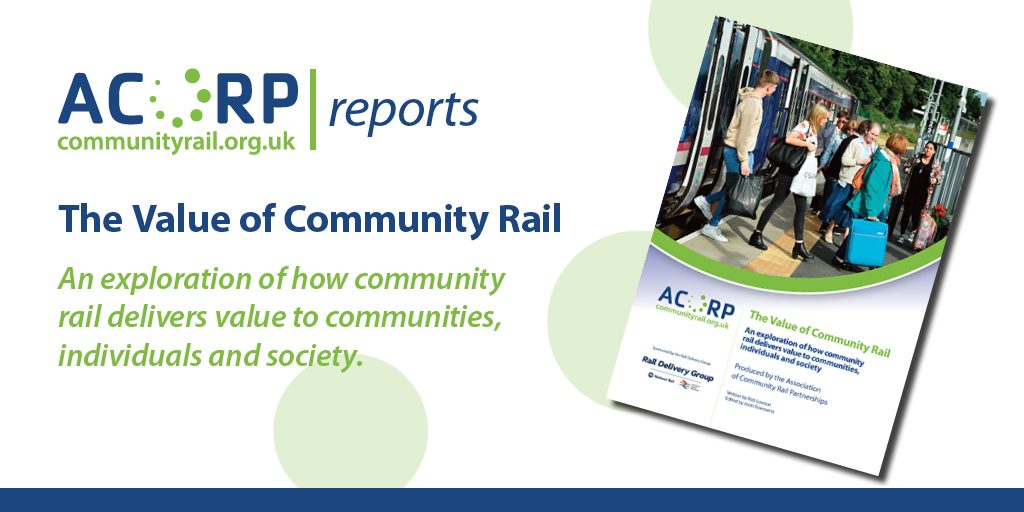 A report out today (11 April) has revealed that a hidden army of 8,500 ‘community rail’ volunteers give nearly 400,000 hours a year to bring local railway lines and stations back into the heart of their communities – promoting sustainable travel, empowering communities, and benefiting health, wellbeing and social inclusion.

The report, by the Association of Community Rail Partnerships and supported by Rail Delivery Group, finds that the community rail movement has seen huge growth in recent years, now with 1,000 station ‘friends’ groups and 61 regional or line-based community rail partnerships across Britain. Its work ranges from community hubs and gardening at stations, to promoting green tourism on community rail lines, to working with the rail industry towards a more accessible railway.

Community rail volunteering alone is calculated to be worth £33.2m annually, through work contributed to local stations and communities, and the social value to the volunteers themselves through improved health and wellbeing.

The Value of Community Rail report evaluates the scale and growth of the community rail movement – which now spans Britain – and the way it delivers benefit to local people, and helps our railways serve their customers. It is produced by the Association of Community Rail Partnerships (ACoRP), the national umbrella body for community rail partnerships and groups, with support from the Rail Delivery Group, which exists to enable rail companies to succeed in delivering a successful railway.

Community rail is a grassroots movement that has grown enormously in scope and influence. It is made up of 61 community rail partnerships, community-based organisations that work along railway lines or across regions, and 1,000+ station-based voluntary groups, all aiming to connect communities with their railways and help communities get the most from local lines and stations. Comparing to a 2015 report suggests that community rail partnerships have increased by 50% and station groups have doubled in number in just four years.

The Value of Community Rail report found that lines with community rail partnerships performed well in terms of passenger numbers, showing a 42% increase from 2008/9 to 2017/18, compared to an overall increase of 35%. This reinforces the idea that engaging communities in their local railways helps people get maximum use from them, as well as attracting visitors using sustainable means.

The report also found evidence of social value being delivered aligned to the four themes of the Department for Transport’s recently-launched national Community Rail Development Strategy:

The report features many examples of community rail groups providing vital connections between communities and railways, and delivering benefits to sustainability, access to opportunity, health, wellbeing, social inclusion and community development. This includes:

Rail Minister Andrew Jones MP, Under-Secretary of State for Transport, said: “Our rail network is simply better for the work of Community Rail Partnerships.  I have seen first-hand the vital work that they do, having met with the inspiring volunteers at the ‘Rail Journey To Recovery’ project in Cumbria last November.

“They transform our stations into community hubs, provide purpose and pride, and give people a say in how their local rail network can work for them.

“In 15 years we have seen hundreds of successful projects created across the UK, and through a new Community Rail Strategy this government is committed to supporting even more schemes.”

Jools Townsend, chief executive of ACoRP, said: “Community rail empowers local people to have a greater stake in their local railways and stations, and to access opportunities that may otherwise be out of reach, through sustainable and healthy means. There are now more than 1,000 community rail partnerships and groups across Britain, and thousands of volunteers benefitting their local communities. Our research shows not only that their numbers have grown, but that they are working with passion to help local people get the most from their railway lines and stations, and they are delivering all sorts of benefits. Community rail is playing a unique role, working at a grassroots level so more people can get around through sustainable travel, and helping people to connect with their locality and those around them.”

“This report shows that community rail partnerships, working together with rail companies, are enabling people to come together and make a positive difference to the railway and the communities we serve. We encourage anyone who wants to make a difference in their community to get involved.”

"The Games haven't just been about sport - they've been about culture, creativity, community & the coming together… https://t.co/g6gQSBUqLL

community_rail
Britain has some amazing scenic routes. From majes

Taking the train is not just about going from a to

#ExploreTheGreatOutdoors and discover the #Cambrid

The recent hot weather and record temperatures are