It has been proven that working with plants and being out in the fresh air is very therapeutic for body and mind and can provide physical, mental and social stimulation. ACoRP members  Poppleton Community Railway Nursery, provide the opportunity to take part in a range of gardening, horticultural, creative, retail, building and railway activities.

The nursery is an ideal non-clinical organisation which could be part of the social prescribing scheme to help individuals improve their health, wellbeing and social welfare and be in control of their own care. 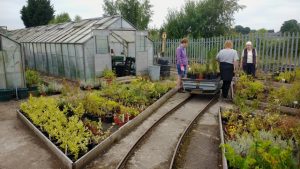 Poppleton Community Railway Nursery was established in 1941 when the Station’s goods yard was transformed into an area to produce food for railway workers’ canteens and the railway owned hotels.  After the war, it produced shrubs and trees to stabilise bomb damaged railway embankments.  Its final role was the production of decorative bedding plants and hanging baskets to beautify stations along the East Coast Main Line and growing plants for ornamental displays to decorate stations for ceremonial visits, the Red Carpet used for such events is still stored on-site. In the late 80s a narrow gauge railway was built to help move plants and compost around the site!  Its long history continued until the late 90s but after privatisation and changes in plant production the nursery closed and the site was abandoned in 2006.

Three years later, in 2009 this little piece of railway history was leased from Network Rail by an enthusiastic voluntary group whose aim is to rebuild and restore the nursery to its former glory for use by the community. It is now a registered charity.

Today the nursery provides a safe haven for people from all walks of life to volunteer and take part in the wide range of activities on offer and you don’t have to live in Poppleton to benefit or know anything about horticulture!  The current volunteers have come from a range of backgrounds including the railway industry, the NHS, education, the armed forces, IT, manufacture to name but a few but they all share an enjoyment of plants, gardens and trains!

The nursery also has a partnership with health agencies in the York area delivering therapeutic horticulture sessions to adults recovering from mental health crises.

For these volunteers the benefits of working at the nursery include improvements in confidence and self-esteem, social development through working alongside a range of different people and the opportunity to make new friends and build new relationships. The skills gained could help to enhance their future career prospects or simply provide a feeling of achievement and purpose

RT @BSACCRP: We've been pleased to welcome pupils from Chiltern School, Dunstable, on a Try the Train type visit from Leagrave to St Albans…