Friends of Ally Pally Station – Hop on a Train

Friends of Ally Pally Station – Hop on a Train

There is a well-established collective in the borough that Alexandra Palace station is in with the unusual name of Wood Green Hopping. They grow, and encourage neighbours to grow, hops. In the Autumn these are harvested and pooled, taken to a local microbrewery, and turned into a unique small batch beer, which is sold in local pubs.  Friends of Ally Pally Station have a container garden spread across the four platforms of the station, and having found a sunny spot on platform 1, asked Wood Green Hopping if they could take part.

Having established what root depth was needed, the team set to work, building two slim trough planters to house the hops plants. They had to be slim as one of them needed to fit between a store room and a lamp post, but careful measuring allowed a snug fit.  Hops were deemed ideal for the station as they grow upwards but not outwards, meaning they don’t impinge on passenger space on the platforms. 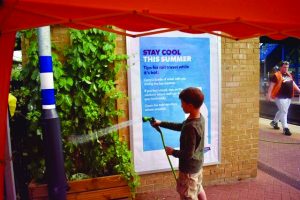 One of the members of Wood Green Hopping gave the group four hop plants, two mature and two young ones.

The planting event happened on Sunday, 1 April, which coincided with one of the regular gardening sessions – called gardening parties – and Easter Sunday. The team noted that a good mix of people came along to help, some to assemble the containers, some to help with the spring planting and general maintenance of the garden, and a couple of experts from Wood Green Hopping to make sure the hops didn’t get planted upside down, which it was noted is easier said than done when they are bare root! Some unexpected help also arrived from a passer-by who just thought it looked interesting and wanted to get involved straight away.

As it was Easter, a couple of the team handed out chocolate eggs to commuters and other visitors, which gave them the chance to engage and explain both about the friends group and the hop-planting.

Two weeks later, the team had to catch up with the hops and met to hammer together a wooden frame for each planter, to train the hops up. By June, only the tallest of the group could see the top of the plants. 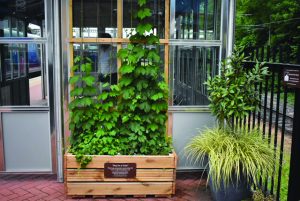 The group said that in one sense, the results of the project would only be known in September once it was time to harvest the crop and re-connect with other neighbours and community groups also growing their hops alongside the station.

But, a group spokesperson said: “In the true sense, the result is that it has attracted huge interest, fascination, and speculation. On the whole, people feel quite proud of what is happening on their station and they are certainly seeing it in a different light. Admittedly, with all the other activity, it is some time since they have thought of it as just a utility, but this project has brought about genuine excitement. Happily, hops are a perennial and can be re-grown year after year and produce a markedly different beer each time.”

The group is confident there will be a “long queue” to try the finished product, which will be sold in the pub across the road from Alexandra Palace station.

The whole project cost just £161, with the compost provided from someone’s garden and the hops donated by the collective. The team estimate that the return on the investment is potentially “very significant”.

Much talk is now centred on what the finished product is going to be called. Suggestions abound such as “Ally Pally Rale” and “Aley Paley”. The group say that the final name will doubtless be even more “silly”, but say the fact that people are talking about it with genuine interest and enthusiasm is an end in itself.

Still time to get your entries in for the 2021 Community Rail Awards, headline sponsored by @GWRHelp and @SW_Help.… https://t.co/BH3x8vtffS

We welcome new @transportgovuk guidance today stating that local #activetravel schemes should be given time to bed… https://t.co/PjlDACv6qy